The Qatar 2022 World Cup semi-final matches are here, with Argentina vs Croatia and France vs Morocco making up the fixtures that will determine the two teams that get to play for the World Cup trophy.

There is a different subtext for each of these countries; for Argentina, it is a team with Lionel Messi and a supporting cast working hard to ensure he wins the one trophy that has eluded him. Croatia were here last time and will want to go further than they did in Russia by winning it all this time.

Morocco carry the hopes of the African continent and the Arab world; they have been this competition’s Cinderella story. In their way is a France team aiming to defend the trophy they won in Russia and, in so doing, become only the second-ever team to defend a World Cup title.

Here is our preview of these two matches and betting tips. For more details about the Qatar 2022 World Cup, visit the BetKing World Kup Hub.

Croatia were mere minutes from seeing their World Cup dreams end in the quarter-finals, but found a late goal that helped them break Brazilian hearts via a penalty shootout that set up a semi-final date with Argentina.

Argentina were pushed all the way to 120 minutes in their clash against the Netherlands but prevailed thanks to Emiliano Martinez’s heroics during the penalty shootout. Now, they are only two matches away from their first World Cup trophy in over 35 years.

After that opening match upset against Saudi Arabia, Argentina got their act together and won four games in a row. Argentina have been one of the most dominant teams in the tournament, and despite the Netherlands’ spirited comeback in the quarter-finals, they prevailed to win via penalties.

In this tournament, they have scored nine goals and conceded five; two of the goals came in the match against Saudi Arabia, and they have not gone behind against any opposition since then. Lionel Messi scored in the knockout stages of the World Cup for the first time in their round of 16 clash against Australia and followed that up with a goal and an assist against the Netherlands. The PSG man remains an essential part of all Argentina does going forward.

Croatia have been resolute at the back, conceding only three goals all tournament. It is in attack they have struggled, scoring more than one goal only once throughout the tournament.

They have now gone to extra time in five of their last six knockout matches at the World Cup, and they have won four of those matches. The most recent being their penalty shootout against Brazil. 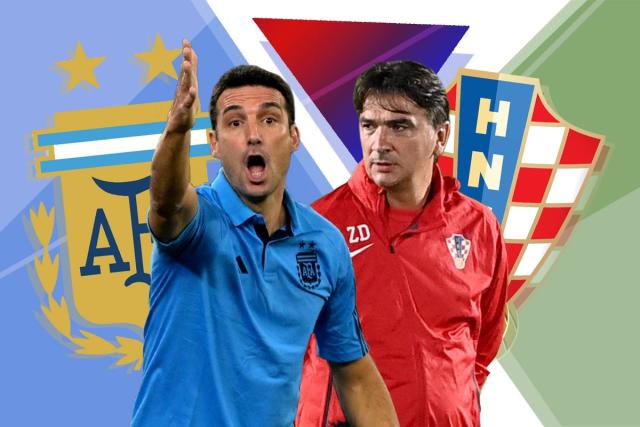 After picking up yellows in their tense clash against the Netherlands, Gonzalo Montiel and Marcos Acuna are both suspended for the semi-final.

Nicolas Tagliafico should slot in at left-back, while Rodrigo De Paul and Angel Di Maria should be fit to start despite carrying knocks.

Borna Sosa and Mislav Orsic recovered from injury to feature in the quarter-final match.

With a fully fit squad available to Zlatko Dalic, most changes will be tactical. with the most likely being Bruno Petkovic taking Andrej Kramaric’s place in attack.

Even though Croatia beat tournament favourites Brazil and have played with a lot of self-belief, their attack has been rather tepid, Andrej Kramaric is their top scorer with just two goals. The trio of Modric, Brozovic and Kovacic in midfield have been solid but might be required to add goalscoring to their repertoire against Argentina if they are going to make it to the finals.

Meanwhile, Argentina have scored at least twice in all their matches but the one against Saudi Arabia. While it is tempting to say a penalty shootout will favour Croatia, especially with Livakovic’s performance against Brazil, Emiliano Martinez has shown he is more than capable of keeping out penalties too.

Lionel Scaloni has shown he is not unwilling to change his tactics and pulled a surprise against the Netherlands by playing a back three for the first time at the World Cup. His most potent weapon is Lionel Messi in attack, his willingness to be a creator for the likes of Julian Alvarez and Enzo Fernandes gives Argentina the edge in this fixture.