Read on to see what the news has been around this unpredictable world cup.

Two weeks ago, the idea of a winter World Cup was still being frowned upon by many. Halting the football season after three months to host the biggest international tournament in sports wasn’t something many were looking forward to but, with the group stage now done, Qatar has served what can arguably be considered the most entertaining FIFA World Cup in recent years. From Saudi Arabia defeating Lionel Messi’s Argentina in their opening game, to Germany crashing out in the group stage for the second tournament in a row right up to Cody Gakpo scoring in every game so far, this tournament has had its own share of drama.

A key reason there’s been an increase in the number of upsets in this World Cup compared to previous editions of the tournament is that the gap in quality in playing and coaching personnel between the “top teams” and the less fancied sides has been reduced over the years. With more national teams having access to top quality coaches as well as the increase in the number of teams from smaller nations whose players now ply their trade in some of Europe’s biggest leagues, there’s been a rise in quality in these “smaller teams”.  Here are some of the biggest news that have shaped the World Cup so far.

Group F was one of the trickiest groups to predict at the World Cup, but many had 2018 runners-up, Croatia and #2 FIFA Ranked country, Belgium as favorites to make it out. Instead, it was Morocco who stunned the casual viewers by topping their group for the first time since 1986. Morocco took a huge gamble ahead of the tournament, and it has paid off.  They had fired Head Coach, Vahid Halilhodžić, just as he had secured World Cup qualification for them due to a fall-out with the FA which was largely based on his refusal to mend the broken relationship with Hakim Ziyech. As a replacement, Walid Regragui was hired just two months before the tournament, in a move that was understandably met with some raised eyebrows. Walid Regragui was an excellent choice; he guided Wydad AC to a league and CAF Champions League double earlier in the year, and had previously led Al-Duhail to a Qatari Stars League title in 2020. Under his leadership, Morocco have now become only the second African side to top their group in multiple World Cups (1986 & 2022) since Nigeria (in 1994 and 1998).

While Morocco celebrated their superb achievement, Belgium’s Golden Generation bowed out in embarrassing fashion. Ranked #2 by FIFA, the 2018 3rd Place side opened the tournament with an unconvincing 1-0 win over Canada before losing to Morocco (2-0) and drawing with Croatia (0-0) to seal their fate. Romelu Lukaku will end up getting a large chunk of the criticism for their failure after he missed 4 big-chances in just 45 mins against Croatia but the attack, led by one of the best players in the world in Kevin de Bruyne, all deserve the blame after a measly return of one goal in three games especially after the defense kept two clean sheets.

There’s an old saying: “Once Is An Accident, Twice A Coincidence and Three Times A Pattern”.  For the Japanese, they’ll gladly take their 2-1 upset wins over the more fancied Spain and Germany and hope this develops into a pattern when they play Croatia in the next round while for the Germans, they’ll skip a step and consider their consecutive group stage exits in the World Cup as a pattern and not a coincidence. 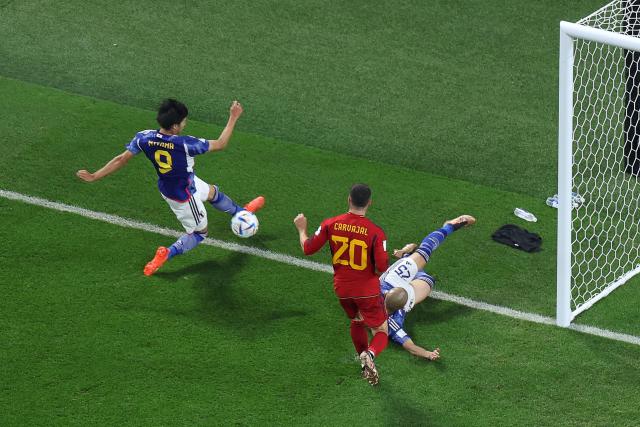 Before the 2022 World Cup, Japan was winless in the 13 World Cup games in which they had conceded the first goal (L11, D2) but two comeback wins over Spain and Germany earned Hajime Moriyasu’s resilient side 6 huge points which were enough to win the group, against all odds. It was only the third time in World Cup history a team had twice been trailing at half-time and turned it around in the second half in the same tournament since Brazil (1938) and Germany (1970). It was also the first time Japan had progressed to the knock-out round in consecutive tournaments, after doing so in 2018; a remarkable achievement for the Asian side.

For Die Mannschaft, another embarrassing exit at the World Cup has left an entire nation stunned, confused, angry and any other emotion viewers of the final season of Game of Thrones felt. Hansi Flick was meant to be the man to turn things around, but a second exit in the group stage – after progression in each of their previous 16 appearances in the tournament – means they’ll have to go back to the drawing board. The Germans have failed to keep a clean sheet in each of their last 12 matches at major tournaments (World Cups & EUROs); an unwanted record for the 4-time World Champions.

This World Cup has been one of the most impressive by African nations. There has barely been a low light thus far and even Tunisia who have been eliminated left with a famous 1-0 victory over the reigning champions, France. Mohammed Kudus (Ghana) and Hakim Ziyech (Morocco) have been some of the best performers from the continent, with Kalidou Koulibaly (Senegal), Achraf Hakimi (Morocco) and Vincent Aboubakar (Cameroon) have also been in the mix. All five of them have been named Man of the Match on at least one occasion and have been instrumental in the continent’s improved display in the World Cup. Besides the good this does for the individual countries, this impressive collective display bodes well for CAF, who stands a chance to get more allocated slots in future tournaments.

The 2022 World Cup has seen England’s veterans take a back seat, while the young players have done most of the shining. All six of England’s scorers are first-time scorers at the World Cup and besides Raheem Sterling & Jack Grealish (both of whom are 27 and are in the primes of their careers), the other four are 25 years or younger; Jude Bellingham, Bukayo Saka (2), Marcus Rashford (3) and Phil Foden. 2018 Golden Boot winner, Harry Kane is yet to score a goal in this tournament but, he has been just as influential as he was in Russia four years ago and leads the tournament in assists (3) – a testament to just how much he has grown as an overall player. It’s also been a particularly warm redemption story for two young Lions – Bukayo Saka and Marcus Rashford – both of whom were the subject of racist abuses (alongside Jadon Sancho) after missing their penalties in the finals of last year’s EUROs.

Triumph in this World Cup is largely seen as the decider in the decades-long debate between these two. Both of their teams are seen as heavy contenders for the title, and these two all-time greats have had a say in them winning their groups. While Bruno Fernandes has been Portugal’s best player so far, Cristiano Ronaldo’s penalty in the opening game against Ghana provided the solid start the team needed. For Lionel Messi, he’s both scored and missed a penalty in this tournament, but his long range effort against Mexico – at a time when his team was facing possible elimination – provided the spark needed for the South American champions. It’s good to see that at the twilight of their careers, these two superstars are still capable of delivering.

To no one’s surprise, Kylian Mbappé has stepped up for France in the absence of Karim Benzema, Paul Pogba and N’golo Kante. After a stunning appearance in the 2018 edition of the World Cup, nerves were never going to be an issue for the PSG forward, and he has been the best player for the reigning champions as they continue in their quest to become just the third team in history to retain the World Cup since Italy (1938) and Brazil (1962). Kylian Mbappé – who has twice been named Man of the Match – jointly leads the scoring charts with 3 goals while also grabbing an assist.

There have been some stunning goals at this World Cup so far. Salem Al-Dawsari’s goal against Argentina had 3 key features; a nice dribble, a wicked hit and an equally memorable celebration to round it up, Marcus Rashford’s freekick against Wales was one hell of a strike while young stars, Bukayo Saka and Gavi displayed brilliant techniques with their opening goals of the tournament. However, two goals stand out so far in the race for the Goal of the Tournament. Vincent Aboubakar all but sent Nemanja Maksimović out of the stadium with his feigned shot before he executed a perfectly weighted chip over Vanja Milinković-Savić in Cameroon’s 3-3 thriller with Serbia. Days before that, Serbia had given up another Goal of the Tournament contender, this time to Brazil’s Richarlison. With the game at 1-0 and slipping away for the Europeans, Vinicius Jr. found Richarlison inside the box who controlled the ball with his left leg and – with the ball in the air – nailed a scissors–kick so great he reportedly gained 4 million new followers on Instagram in less than 24 hours.

Germany and Belgium may have been the highest profile exits at the World Cup so far, but there have been other performances that have left a lot to be desired. Denmark, Wales and Qatar each finished bottom of their groups and scored an embarrassing 1-goal apiece.

For the Danes, there was a belief that their semi-final appearance in last year’s EUROs was a sign of good things to come. They had also beaten France (twice) earlier in the year in the UEFA Nations League which further fueled the optimism of their fans, but they ultimately fell flat on their faces when it mattered most. Wales’ return to the World Cup after a 64-year absence was equally disappointing as they failed to score a goal from open play, with Gareth Bale’s late penalty against the USA the only time they had the ball at the back of the net.

For the hosts, Qatar, they have undoubtedly put on one hell of a tournament but on the pitch, their team was largely disappointing. The reigning Asian champions lost each of their three games by a two-goal margin, while becoming the first host nation to lose all of its games in football’s premier tournament.

Australia Heads To The Knock-Out Round

Australia’s qualification for the knock-out round isn’t getting the headlines it should, but they deserve a lot of credit for this achievement. They took the long route to Qatar after playing a total of 20 qualifying games across 1,008 days culminating in a victory over Peru on penalties in the intercontinental playoffs. They took their chances in a group that gave them little to none prior to the start of the tournament. After a heavy defeat in the opening game to France (4-1), they turned things around to become only the third side in World Cup history to lose their opening game while conceding 4+ goals but still qualify from the group stage since Yugoslavia (1990) and Ukraine (2006). Additionally, their wins over Tunisia and Denmark are their first pair of consecutive wins at the tournament in their history.