Week 11 of the NFL kicked off with a 27-17 for the Tennessee Titans over the Packers in Green Bay on Thursday night. The Packers had snapped their 5-game losing streak with a victory over the Cowboys last Sunday, and we presumed they had turned a corner, but we were wrong, and they’ve now dropped to 4-7 and are in real danger of missing the playoffs. Meanwhile, the Titans have moved to 7-3, 3 wins better than the Colts, and you can go ahead and pencil them for a playoff spot. Let’s go ahead and look at the rest of this week, starting in Indianapolis.

All bets come with some risks, especially in the NFL, but these Extra Point Bets are some of the easy ones to hit.

These two teams made major headlines last weekend for different reasons. Interim Head Coach, Jeff Saturday, started his NFL career with a 25-20 comeback win for the Colts over the Raiders while the Eagles had their unbeaten start to the season halted by the Washington Commanders.

The Eagles have struggled to stop the run since DT Jordan Davis got injured in Week 8. Since then, they’ve given up the 4th most Rushing Yards per Game (136.7) and the loss of DT Marlon Tuipoulotu this week only meant this would get worse. Considering that Colts’ win over the Raiders saw them rush for a season high 207 Yards, with Jonathan Taylor getting 147 of those and 37-year-old QB Matt Ryan getting 39-yards on one play, this was always going to be a problem for the Eagles. They’ve added former Lions duo Linval Joseph and Ndamukong Suh to the DT positions to address this and though the Colts are still riding on Jeff Saturday’s new Head Coach bounce, the Eagles should get back to winning ways on Sunday.

Bears QB Justin Fields has rushed for 325 Yards in the last 2 games on 28 attempts. This is a figure that Running Backs would be proud of over a 4-game stretch, and yet, a QB has those. Last week, we spoke about the Bears finally finding an identity, and they’ve further leaned into it. They’re the first team in NFL history to record more than 225 Rushing Yards in 5 straight games, and they lead the league in rushing average (201.7 YPG). Sadly, they’ve not been able to turn those performances into wins, and they have just one win in their last 6 games. They travel to Atlanta to face an inconsistent Falcons side and though a win isn’t guaranteed by any stretch, you could see them putting up points. 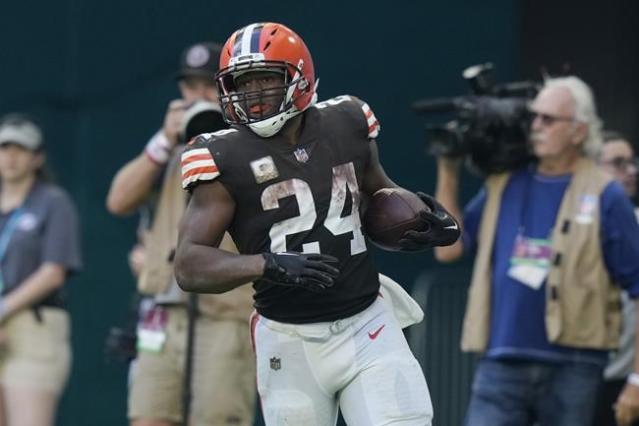 Buffalo Bills’ QB Josh Allen has seen his MVP bid take a major hit over the past 3 games (in which he has lost twice). He has needlessly tried to be a gunslinger rather than keeping it simple, and this has cost them in the past two games. He also has 7 turnovers in the past 3 weeks, which include 6 interceptions – 2 in each of those 3 games – and a fumble. Furthermore, he leads the league in interceptions this season with 10, which no one saw coming, and has thrown 3 Red Zone interceptions – tied for the most in the league. Josh Allen is still an amazing QB, that isn’t changing anytime soon, but he just needs to stop trying to be the hero. Despite this hiccup, the Bills still lead the NFL in total offense (424.1 average per game) and the Browns rank 31st on scoring defense, allowing 26.4 PPG. This should be a bounce back game for the Bills, and it could get very ugly for the Browns, who have allowed over 30 PPG against each of their AFC East opponents so far. 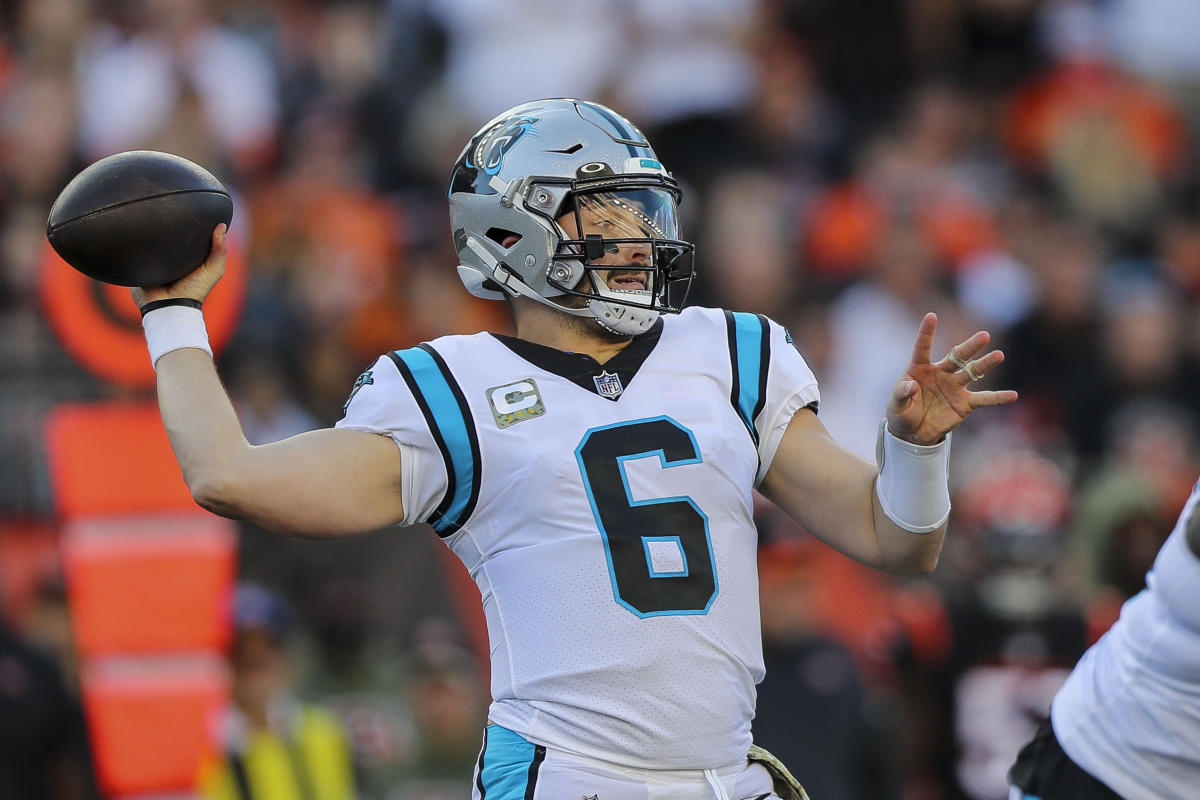 The Panthers have lost 8 straight games on the road – the longest active streak in the NFL, and I don’t see a way for them to get a win in Baltimore. The Ravens are on a 3-game winning streak and have had 10-days to get ready for this. However, the Panthers should be able to get over 13.5 points.

There’s just one way to stop the New York Giants; stop Saquon Barkley. It sounds easy, but teams have struggled to do that and this one-dimensional New York Giants offense is averaging 164.8 Rushing Yards per Game including last week’s 191 against the Texans. This is a problem for the Lions, who gave up 258 Rushing Yards to the Bears last week and have held opponents to fewer than 100 Rushing Yards just once this season (Week 2 to the Commanders). The Lions may have won 2 straight, but they’re not reliable in closing out games. They are, however, more reliable in scoring points and have averaged 24.3 PPG. So, there’s some value in going for the over on Total Points.

The Jets have lost 13 straight times to the Patriots in New England, which is a worry for this young Jets side. The last time they beat their AFC East rivals (2015), the iPhone 6 had just come out, Justin Bieber asked the very important question “What do You Mean?” in his hit single, Beast of No Nation had just dropped and current QB Zach Wilson was still in the 4th grade. Speaking of Zach Wilson, he’s 0-3 against the Patriots and in those 3 losses, he’s thrown for 7 interceptions and just 2 Touchdowns. In the loss to the Patriots just 3 weeks ago, he threw 3 interceptions and pretty much handed the game to the Patriots. In the post-game interview, he guaranteed a win against the Patriots in this game, which is very, very, very, very, very bold of him. Yes, 5 verys. I’m not sure the Patriots will take this well, especially Matthew Judon who leads the entire league in sacks (11.5)

Last week, we had this to say about the Washington Commanders: “Over the course of the season, we’ve learned to give the Commanders some respect. With every possible off-field distraction thrown at them this season as well as injuries in key positions, they’ve won a respectable 4 games, including a 23-21 win over the Packers last month. They’ve only given up 25 or more points twice this season (to the Cowboys and Lions) and their defense generally holds up well against most offenses.”  We then proceeded to predict a loss to an undefeated Eagles team. Instead, the Commanders went on to hand the Eagles their first loss of the season (32-21) and we’ll forever regret not being bold enough to pick them to win. We won’t make that mistake this week, and we’re going for a second consecutive against the Texans, who are statistically the worst team in the entire league.

The Chargers have been disappointing this season. We expected them to make a Super Bowl run and QB Justin Herbert to make an MVP run, but neither of those look like happening. To be fair, they have suffered major injuries to key players, and you can draw a line between that and their poor results. Keenan Allen and Mike Williams’ injuries have had the most significance to the Chargers. With them on the field, Justin Herbert has had a QB Rating of 77 and averages 7.4 Yards per pass. Without them, those figures drop to 67 and 6.1, respectively. Luckily for the Chargers, both players were available for training and could be fit in time for this AFC West clash.

The Chiefs hold the #1 Seed in the AFC Division and Patrick Mahomes has looked like the MVP. He leads the league in Touchdowns (25) and has thrown TDs to 10 different players this season – the most in the league – while his sidekick, Travis Kelcee has caught 8 of those Touchdowns – tied for the most in the league alongside Devante Adams. Despite Mecole Hardman being placed on IR, the Chiefs have enough to win this having already beaten them once this season (27-24 in Week 2) but I’ll play this safe by going for the over on Points Totals.

The Steelers welcomed back reigning Defensive Player of the Year TJ Watt last week, and he was instrumental in their 20-10 victory over the Saints. They ran for 217 yards and controlled the clock. The Saints were limited to just 10 First Downs all game and were 3/12 on Third Down efficiency. The Steelers aren’t pretty to watch. They’re 31st in scoring offense and a loss would see them off to their worst start since Mike Tomlin took the Head Coaching job in 2007 and seriously jeopardize his record of never having a losing record during his 15 seasons, which is the longest ever streak in the NFL. When both sides met in Week 1, we backed the Steelers to pull off an Upset of the Week, and they delivered with a 23-20 win in Overtime. We’re backing them again, and I expect the Steelers to grind out another ugly win over the Bengals, who are still without star Wide Receiver Ja’Marr Chase.

That’s right. We’re going for 2 Upsets of the Week. Last week, we backed the Vikings to pull off an upset win against the Bills in Buffalo, and they delivered what most people are rightly calling the Game of the Year. Why shouldn’t we back them again? They’re even at home this time.

Last weekend, Dallas lost in ugly fashion against Green Bay and blew a 14-point lead heading into the 4th Quarter for the first time in franchise history. I’ll take that again and this time, I’ll add some context. Before Sunday, Dallas had won 195 games (yes, a hundred and ninety-five games) when entering the 4th Quarter with a 14-point lead. That’s how bad the collapse was. Dak Prescott may have crumbled under pressure, but their Run Defense was equally questionable. As Micah Parsons put it, “Until we prove we can stop the run, every opponent is going to try and expose us”.  This season, the Cowboys defense is ranked 26th in Yards per Rush allowed (4.8), 30th in Run Stop Rate (28%) and T-27th in Rushes of 10+ Yards (40). They’ve allowed back-to-back 200+ Rushing Yards after allowing that just 3 times over the last 20 seasons. The Vikings know how to exploit this obvious weakness and in Dalvin Cook, who has 727 Rushing Yards this season (8th in the NFL), they have the perfect weapon.