Sunday’s early kickoff sees two of London’s premier teams clash in what promises to be a feisty derby. The Blues are on a 12-game unbeaten run at home but are well aware that the last visiting team to have won at Stamford Bridge are the Gunners in a game that ended 4-2 featuring goals from their young stars – Bukayo Saka, Emile Smith-Rowe & an Nketiah brace. Graham Potter will be glad his team bounced back from the hammering they suffered at Brighton over the weekend with a comeback win over Dinamo Zagreb. The Englishman has 1 defeat in 11 games in charge of Chelsea but the injuries are starting to pile up for him which is a new worry. Kepa was taken off at Brighton while Ben Chilwell suffered a hamstring injury in the win over Dinamo Zagreb and could likely miss the FIFA World Cup later this month.

All 5 of Arsenal’s dropped points have come in away games but they still remain the best away team in the Premier League with 4 wins & a draw in 6 games and only 4 goals conceded. Given their form and given Chelsea’s injury worries, the Gunners will go into this as slight favourites but they have to beware of their former captain, Pierre-Emerick Aubameyang who has a score to settle with the coach that threw him out of Arsenal.

Unai Emery will take charge of Aston Villa for the first time when they face Manchester United in the Premier League before a trip to Old Trafford on Thursday for an EFL Cup game. Since Steven Gerrard was fired by Villa, they’ve won 4-0 at home to Brighton and lost by the same scoreline to Newcastle on the road so it’s hard to assess them as a team. Emiliano Martinez could be absent for this tie after he had to be taken off against Newcastle due to a concussion. It was his substitute, Robin Olsen who conceded all 4 goals and Villa will be slightly worried if they’re without their star goalie for this crucial game.

Erik ten Hag’s side have been in good defensive form with 6 clean sheets in their last 7 games, but their 9 goals scored in those 7 games leaves a lot to be desired. They’ll be without Bruno Fernandes who is serving a one game suspension for yellow card accumulation while Antony, Sancho & Martial are still being monitored and haven’t been given the green light yet. Aston Villa have managed 4 points in their last 2 matches against Manchester United – as many as they had managed in the previous 17 games. This is a big worry for the Red Devils who know that with Chelsea and Arsenal facing off & with Spurs hosting Liverpool, they can get into the top 4 if results go their way. 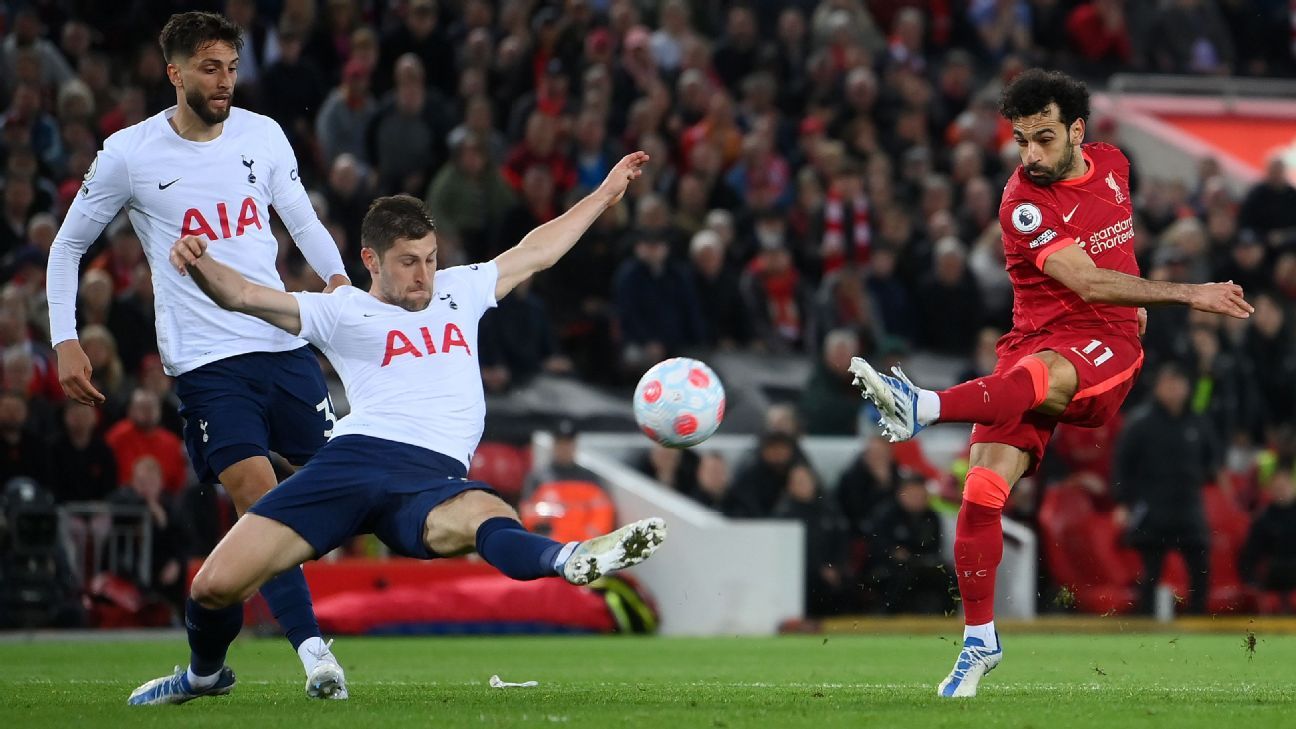 One of England’s most one-sided fixtures will take place at the Tottenham Stadium and Liverpool would be eager to use their win over Napoli as motivation to breathe life into their dying domestic campaign. The Reds haven’t lost to Tottenham since October 2017 and before that, November 2012. Conte watched from the stands as his side pulled off a comeback win away at Marseille to top their Champions’ League group and qualify for Round of 16 but must have been cursing his luck when Heung-min Son was taken off due to a fracture around his left eye. The ensuing surgery has ruled Son out of Sunday’s big game with Spurs still missing Richarlison, Kulusevski & Cristian Romero.

Liverpool look like a totally different side when they play in the Champions League. They won their last 5 games in the group and scored 17 goals, the 3rd best behind Napoli (20) and Bayern (18). In the Premier League, though, they have 3 defeats in their last 5 games and have failed to win an away league game all season (3L, 2D). Mo Salah’s numbers look good on paper – 12 goals & 5 assists in 19 games in all competitions – but the eye-test tells a different story. The former African Player of the Year doesn’t look as dominant as he’s been in the past but perhaps, this is the game he needs to get back on track.

Jose Mourinho has already kicked off the mind games ahead of the Rome Derby by taking a slight dig at Lazio after they dropped out of the Europa League to the Conference League: “I think Lazio have now become the favourites to win the Conference League. I say this with honesty.”  The comment was made in reference to Lazio director Igli Tare who initially mocked AS Roma for winning the Conference League last season by calling it a “loser’s competition” and now has to compete in it.

Though they share the same stadium, AS Roma have lost just 2 of their last 24 home games to Lazio in the Serie A including a 3-0 win the last time both teams met. Both teams are separated by just 1pt with Roma in 4th having won 4 of their last 5 league games while Lazio are 5th with 3 wins and a draw in their last 5.

They will have key players miss this important fixture. For Jose Mourinho’s side, they’ll be without Paulo Dybala, Georginio Wijnaldum and Leonardo Spinazzola, who are all side-lined by injury while Maurizio Sarri will miss his captain Ciro Immobile (injury) and Sergej Milinkovic-Savic (suspension). Though AS Roma are slight favourites for this game, Lazio have been scoring freely this season; their 24 goals scored is 4th most in the league while their 8 goals conceded is the 2nd best. Something Mourinho will have to note.

These two Italian heavyweights come into the game with 4 league wins in 5 apiece which is decent form but their positions in the standings (Inter at 6th and Juventus at 8th) remains a worry for them. Inter have won the last 3 meetings in this fixture with each of those 3 coming in different competitions; the Serie A, the Coppa Italia and the Supercoppa Italiana.

Juventus confirmed their drop to the Europa League with a loss to PSG on Wednesday – their 5th loss in the group stage. While they’re still licking their wounds, they’ll be confident about how their defense has held up this season in the league. Only Barcelona (4) and Benfica (5) have conceded fewer goals than Juventus (7) in the league out of Europe’s top 10 leagues which is impressive.

There’s nothing like a derby to turn over a new leaf and the Seville derby is the perfect opportunity for Sevilla to get back to winning ways. They’re in the Relegation Zone after losing half of their 12 games and conceding 19 goals. They’ve also dropped out to the Europa League which many have jokingly said is where they’ve always wanted to be but, they’ll be disappointed at how easy they made it for Dortmund who finished above them.

Real Betis on the other hand are having a good season. They’re in 4th place in the league, topped their Europa League group ahead of AS Roma after going the entire 6 games unbeaten and they’re healthy & life couldn’t be better for Manuel Pellegrini’s side. Real Betis have won 5 of their 6 games at home which is enough to make them huge favourites against this struggling Sevilla side who will be without Isco due to a suspension.

Following an 8-game winning streak in all competitions between mid-September and mid-October, Real Sociedad have lost 3 of their last 4 games including their last 2 La Liga matches. This can be pinned on their tough schedule since the last international break that has seen them play 2 games per week with a lot of their players picking up injuries along the way. They failed to score in any of those 3 losses and while they continue to play with intensity and passion, it’s evident that their attack has been stretched thin. Valencia have lost both of their last 2 games in the league and are winless in 4. They’ve kept just 2 clean sheets all season and just 1 in their last 10 games. This has all the making of a close game even though Valencia go into this with a fresher set of players.

Bayer Leverkusen have made their worst ever start to a Bundesliga season. 16th is their lowest finish since winning promotion in 1979 and they currently sit in that position – a relegation playoff spot. They’ve regressed all over the pitch most notably in attack where Patrik Schick has scored just twice in 11 Bundesliga appearances so far this season. To put that into context, he had eight at the same juncture in 2021/22. Though they’ll be welcoming the table toppers, Leverkusen will be a bit relieved, thanks to their head-to-head record. They’ve lost just one of six Bundesliga meetings with Union (W2, D3) even though they’ve only won 1 of 3 at home.

Union Berlin is having a great season. 4 consecutive wins in the Europa League (after 2 losses in 2 games to start the campaign) has seen them qualify for the knockout stages of the tournament while they sit on top of the Bundesliga for the 7th matchday running – the longest by a team not named Bayern Munich since Gladbach in 2019. They also have the best defense in the league having conceded 9 goals which has been key to their success.

Separated by just 1 point, the top two in the Eredivisie meet in Amsterdam when Ajax host PSV.  Both teams ended their European campaigns with qualification for the Europa League knockout stages through different routes. For Ajax, they dropped out of the Champions League having finished 3rd in Group A while PSV finished in 2nd place behind Arsenal in Group A of the Europa League.

Though AZ Alkmaar (3rd), FC Twente (4th) & Feyenoord (5th) are within 4 pts or less of the top of the Dutch League, Ajax and PSV are in a class of their own and it feels like only a matter of time before they pull away from the rest. Ajax has scored 38 league goals in 11 games – an average of 3.45 per game – while PSV’s 3.33 per game (40 goals in 12) is just as impressive. PSV’s Cody Gakpo leads the league in both goals (9) and assists (11) while teammate Xavi Simons is joint second on the scoring charts with 8 goals – not bad for a 19-year-old attacking midfielder in a new league.

Two Champions League hopefuls clash this weekend at the Orange Velodrome as 5th place Marseille hosts 8th place Lyon. Marseille’s loss to Spurs on Tuesday meant they finished bottom of the group and missed out on the Europa League. This could be a blessing in disguise for them as they’ve really struggled to keep up with 2 games a week since the international break and have 5 losses and a draw in their last 7 games in all competitions. 3 of those losses came at home which should give Lyon some confidence going into this.

Lyon haven’t kept a clean sheet away from home this season with their last Ligue 1 shutout coincidentally coming against Marseille in a 3-0 win for Lyon in May. 4 straight home losses for Marseille feels like a big call but this is surely going to be a tight game.