Real Madrid come into this game needing a win to confirm their place as Group Winners. The reigning European Champions lost their first competitive game since April when they visited Germany to face RB Leipzig last week and followed that up with a frustrating 1-1 draw in La Liga on Sunday as their lead at the top of the table was cut to just 1 pt. With the newly crowned Ballon d’Or winner Karim Benzema still out injured, Madrid seem to be struggling but it’s widely expected that a chance to win the group should be enough motivation to bounce back.

Celtic’s draw against Shakhtar sealed their fate as the 4th place team in the group. While they continue to impress in the Scottish League with a 3-0 Livingston to maintain a 4pt lead over Rangers, they have not been able to replicate that form in the Champions League. Over the weekend, they welcomed back Portuguese winger, Jota who had been out with an injury. He marked his return with a goal, his 11th goal contribution in 13 games in all competitions while Japanese forward Kyogo Furuhashi also got on the scoresheet as he registered his 8th league goal in 10 games for the Scottish League leaders.

Though Celtic have struggled to score in the Champions League this season (3 goals in 5 games), Real Madrid have failed to keep a clean sheet in their last 3 European games which could make things a little interesting. Los Blancos are heavy favourites for this one and should get the win but perhaps a goal for the Scottish side is on the cards. 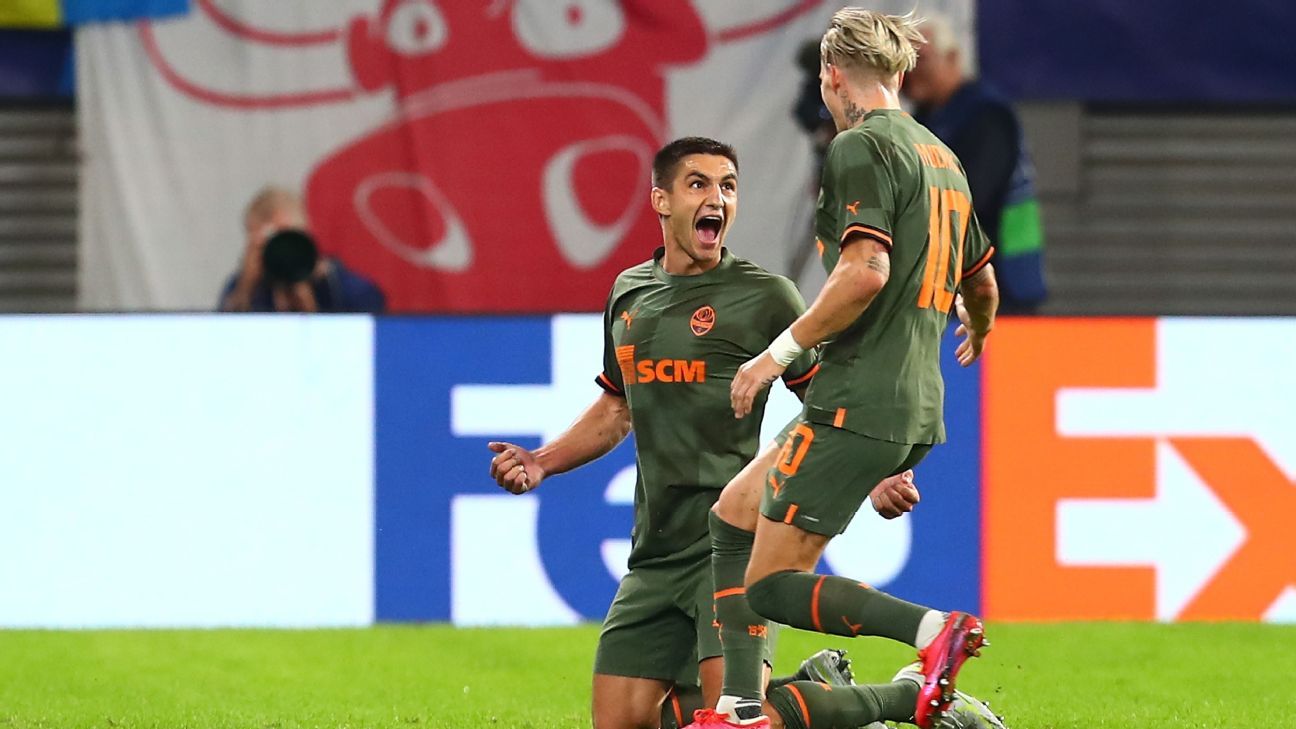 In what should be the fiercest match of the day, Shakhtar Donetsk hosts RB Leipzig knowing that a win would see them through to the Round of 16 for the first time in 5 years. The Ukrainians already stunned RB Leipzig earlier in the campaign when they scored all 4 of their shots on target as it ended 4-1 with goals from Mykhalo Mudryk, Lassina Traore and a brace from Marian Shved. RB Leipzig have bounced back from their pair of defeats in the first two UCL matches and have now won 3 in a row including a 3-2 victory over Real Madrid last week. With a 3-pt advantage heading into this game, a draw would be enough to see the Germans through to the next round but they’re wise enough to know not to settle against this dangerous Shakhtar side.

There has been no shortage of goals when Leipzig plays in the Champions League this season. They’ve scored 9 goals and equally conceded 9, keeping just one clean sheet in the process. However, their 9-game unbeaten run since they returned from the last international break should fill them with some confidence. The goals have also flowed when Shakhtar Donetsk plays. They’ve scored and conceded in each of their 5 Champions League games this season. In the league, they’ve dropped 5pts behind first place Dnipro and with their home games played in Poland, the home advantage this tie should have is barely existent.

These two teams meet in a winner-takes-it-all match and for the Italian champions AC Milan, they will be wondering how they found themselves in this position. A commanding 4-0 victory over Dinamo Zagreb last week may have put them back on track to make the Round of 16 but they’ll still have a few regrets about their two losses to Chelsea on Matchdays 3 and 4. Ahead of this tie, they’re going to be without a few injured players; Davide Calabria, Alessandro Florenzi, Alexis Saelemaekers, Goalkeeper Mike Maignan and Zlatan Ibrahimovic while Fikayo Tomori returns from suspension after sitting out the trip to Dinamo Zagreb.

Salzburg are still sweating over the fitness of Junior Adamu, last week’s goal scorer against Chelsea. In his absence this weekend, Noah Okafor netted the only goal in their win over Hartberg in the Austrian Bundesliga. The team has failed to score more than one goal in any game this season; they have three 1-1 draws, a 1-0 win over Dinamo and a 1-2 loss to Chelsea. It’s expected that this low goal output would continue against a Milan side playing in front of their home fans.

With PSG travelling to Juventus in the other group fixture, there is a realistic chance that the Portuguese side could end up winning the group if they claim all 3 points against Maccabi Haifa and PSG fails to beat the Old Lady. Everything seems to be going right for the Eagles which is proof of how resilient and well coached they are.

They’re currently 6pts clear at the top of the Primeira Liga with a real shot at winning the title while still maintaining their incredible European form. Head Coach Roger Schmidt guided them to 11 points from 5 games & they sit 2nd in Group H, just behind first-placed PSG on goal difference. Personally, Roger Schmidt is on a 13-game unbeaten streak in the Group Stage and they’re heavy favourites against Maccabi Haifa.

Though bottom of the group, Maccabi Haifa have not been shy in front of goal and have netted in all but one of their 5 UCL group stage games – the 2-0 loss to Benfica on Matchday 1. Their impressive attack is one of the reasons why they’re in a position to qualify for the Europa League if results go their way in the Juventus v PSG as they sit level on points with the Old Lady; 3 apiece. 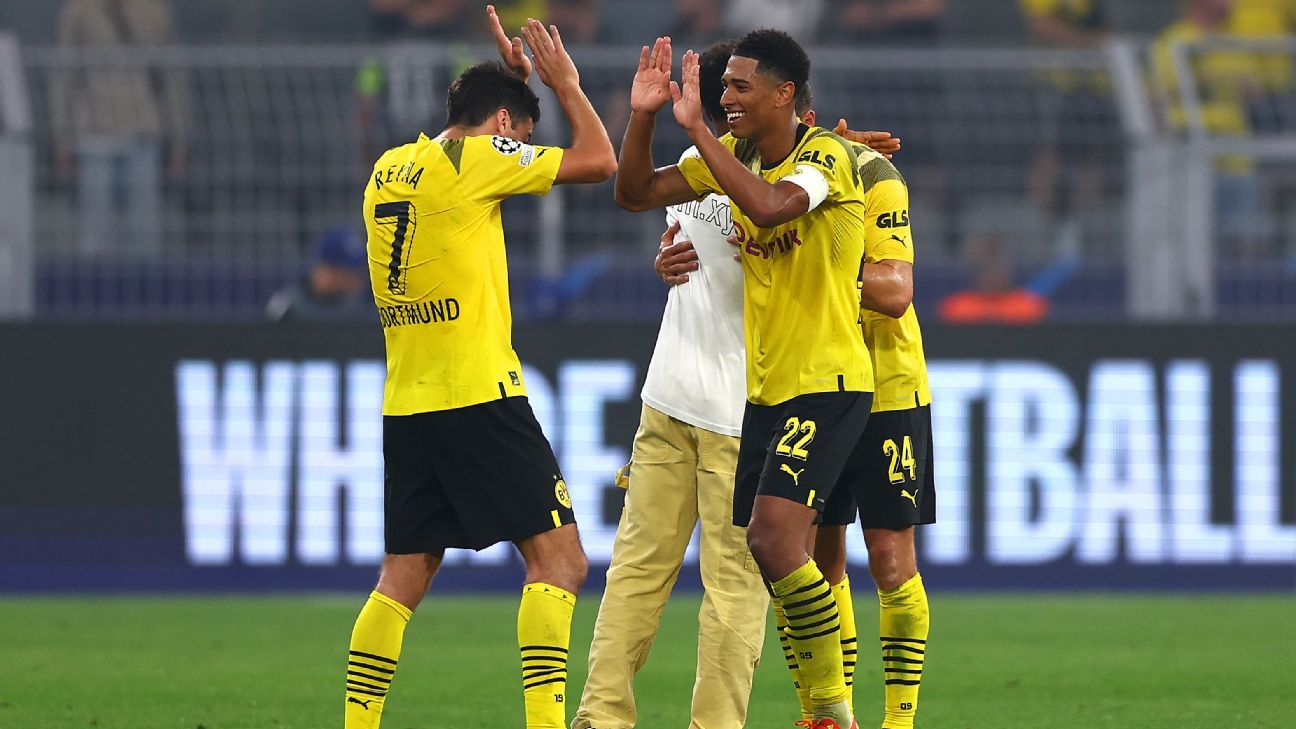 Both teams meet in Denmark for a dead rubber game in Group G. Copenhagen are going to finish bottom of the group while Dortmund are already through to the Round of 16 in second place.

Copenhagen are one of only four teams in this season’s Champions League who are yet to win in the group stage but more embarrassingly, they’re the only side yet to score despite having 2 points and they’ll be hoping to avoid becoming the 4th team in Champions League history to not score a single goal in the group stage after Deportivo La Coruña in 2004/05, Maccabi Haifa in 2009/10 and Dinamo Zagreb in 2016/17.

Dortmund have beaten Copenhagen in all 3 European meetings in their history including a 3-0 Matchday 1 win in Germany. However, Copenhagen is the only team in European Cup/Champions League history to have played out 4 consecutive goalless draws at home; twice in the 2016/17 season and twice in the games against Sevilla & Man City this season.

Man City welcomes Sevilla for another dead rubber game in Group G but perhaps, this one could be more exciting. The Premier League champions have struggled to find the back of the net in the absence of Erling Haaland who is still out injured. Their best chances in the three halves Haaland has missed have come from set-pieces – a penalty against Dortmund which Riyad Mahrez missed and a sweetly struck freekick against Leicester City by Kevin de Bruyne. While this is both a short term & long-term concern for Pep Guardiola, he knows this game has nothing much riding on it.

Sevilla on the other hand are having an unforgivable season. After finishing 4th in each of the last 3 La Liga campaigns, they find themselves in the Relegation Zone and have kept just 3 clean sheets in all competitions this season with 2 of them coming against Copenhagen. The Europa League bound Sevilla have lost their last 3 games against Man City and have failed to win any of their last 6 games away from home in the Champions League (5D, 1L).

Juventus’ pride will be on the line when they face PSG on Wednesday. A 4-3 loss to Benfica last week sealed their fate and saw them eliminated from the Group Stage for the first time since the 2013/14 season. Their 11 goals conceded is the joint 5th worst in this year’s edition of the Champions League and their 7th position in Serie A is equally worrying.

Make no mistake, though, they will be fighting for a win in this game. Pride aside, Juventus know that winning the Europa League could be their best bet to making it back to the Champions League next season given how competitive the Serie A is this year. A win over PSG would guarantee them a place in the Europa League as they look to avoid being the first Italian side to lose 5 Champions League Group Stage games since AS Roma in the 2004/05 season.

PSG will also be desperate for a win. They need all 3 points to finish top of the group ahead of Benfica and the duo of Messi & Mbappe will be hungry to secure the win in the absence of Neymar who is suspended for 1 game after picking up his 3rd booking last week. A slight worry for PSG will be their defense. The Parisians have kept just 1 clean sheet in their last 11 UCL games and haven’t kept one away from home since the 2-0 victory at İstanbul Başakşehir in October 2020.

Chelsea hosts the Croatians in a reverse fixture of a loss that sealed Thomas Tuchel’s fate. The Blues have turned things around and have already qualified for the next round as group winners, thanks to their superior head-to-head record over AC Milan. Graham Potter suffered a humiliating defeat at Brighton as his unbeaten start to life in charge of Chelsea came to an end. But, as Chelsea fans will remind him, only one Blues Head Coach has gone unbeaten in their first 5 Champions League games for the club – Roberto Di Matteo in 2011/12 who ended up winning the tournament that year. This should be enough motivation for the London side.

Dinamo Zagreb are on the verge of becoming only the 2nd side in Champions League to do the double over Chelsea in the Group Stage since Basel in 2013/14. The Croatians will feel slightly disappointed in their failure to capitalise on the Matchday 1 victory over Chelsea. They’ve scored just 2 goals and picked up 1 point since that win and currently sit last in Group E. A victory could see them make the Europa League if results in the AC Milan v RB Salzburg game goes their way but both of those seem highly unlikely.