Barcelona could already be knocked out of the Champions League by the time they play Bayern Munich at the Nou Camp on Wednesday night. Barcelona are behind Bayern and Inter Milan in Group C, a victory over the Bavarians will only put them level with Inter, who will have qualified if they beat Viktoria Plzen in the early evening game.

Bayern Munich are top of the group with 12 points, winning all four of their matches and scoring 13 goals in the process. Barcelona will also be seeking revenge for their 2-0 loss in the reverse fixture but will be wary of a Bayern side that has won their last four games in all competitions. They have also not lost to Barcelona since the semi-finals of the 2014-15 Champions League and are looking for a fifth straight win against Barcelona

Hector Bellerin could slot in at right-back after Sergi Roberto injured his shoulder against Athletic Club. Ronald Araujo, Andreas Christensen and Memphis Depay are still out injured.

There is much more at stake for Barcelona who have been rather unfortunate in the Champions League this season, they should be able to get the win against what will likely not be a full-strength Bayern Munich side, as their attention will be on wresting the Bundesliga leadership from Union Berlin.

Inter Milan play Viktoria Plzen at the San Siro knowing a victory will see them through to the next stage regardless of Barcelona’s result against Bayern. Inter’s 3-3 draw against Barcelona already gives them the head-to-head advantage, they will aim to take care of business without needing help from Bayern.

Simone Inzaghi’s men come into this match off a dramatic 4-3 win against Fiorentina in the Serie A, they were comfortable winners last time they played Viktoria, coming away with a  2-0 victory in a one-sided affair where the Nerazzurri had 19 shots and missed a number of big chances.

The same is expected when they host the Czech side at the San Siro, they will be missing midfield maestro Marcelo Brozovic due to injury, but are boosted by Henrikh Mkhitaryan’s availability. Romelu Lukaku could also feature after a 6-week absence.

Liverpool need only a draw to move on to the knockout stages, while anything short of a win will mean Ajax’s champions league campaign will not progress beyond the group stage.

This is a rather tall task for Schreuder’s team after suffering three consecutive losses in the Champions league. They started the campaign brightly with a 4-0 victory over Rangers, but now need two wins and favourable results elsewhere to hope for knockout-stage qualification.

Liverpool has had a rollercoaster of a season, they followed up a gutsy win over Manchester City with a surprising 1-0 loss to Nottingham Forest. Jurgen Klopp will be hoping for a better showing in front of goal from his attack while keeping Alisson Becker less busy than he has been this season.

His team were ruthless against Rangers in their last Champions League match, putting 7 goals past the Scottish side – the first time they have scored 7 goals in the Champions since beating Spartak Moscow 7-0 in 2017 – and managing 20 shots, they should be able to leave the Amsterdam Arena with at least a point. 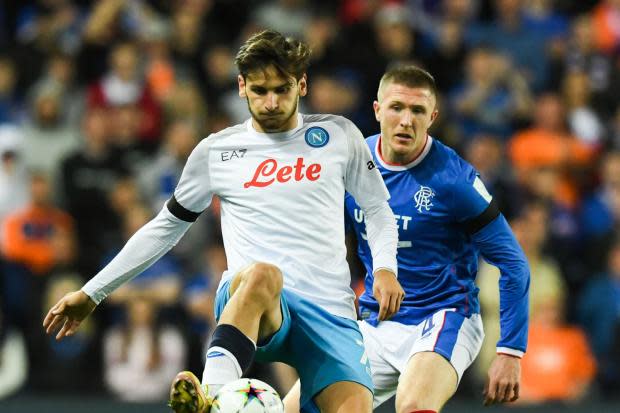 Napoli has been perfect in the champions league this season and aim to make it 5 wins in 5 matches when they host bottom-side Rangers.

Napoli assured qualification into the knockout phase with an impressive win against Rangers and now only have to concern themselves with winning the group.

Napoli will be the first Italian team to win their first five group games since Juventus did the same in 2004. There is little reason to believe they will not achieve this feat; Rangers are yet to earn a point this season, losing all 4 games they have played and have only managed to score once, with 16 goals conceded.

Napoli on the other hand has put 17 goals past its opponents while conceding only 4. Victor Osimhen was the hero last time Napoli was in action, his late goal against Roma meant they kept their Serie A unbeaten streak going, he should be leading the line on Wednesday.

Unbeaten Club Brugge welcomes second-placed Porto to Belgium looking to put some distance between them and the chasing pack.

Simon Mignolet’s heroics against Atletico Madrid meant Club Brugge stayed top of Group B and earned them an important point that ensured qualification out of the group.

They will be looking to finish the group as winners but will be without Kamal Sowah who was red-carded against Atletico. Porto on the other hand will be desperate for a win that could set up a blockbuster final group stage match against Atletico in Porto on November 1st.

With less at stake for Club Brugge, they could take their foot off the gas against Porto. After a rather deflating loss to rivals, Benfica, Porto will have to show a response against Club Brugge who put 4 goals past them last time and remain the only side in the competition yet to concede a goal.

Atletico Madrid could not find a way past an inspired Simon Minoglet last time, leaving them with just one win in four games in Group B.

They host Bayern Leverkusen who are only one point behind and still harbour hopes of qualification.

Any result other than a win for Atletico will see them lose ground to Porto who play an already qualified Club Brugge.

Antoine Griezmann’s impressive form will be needed against the Germans,   the Frenchman has scored three goals in his last three La Liga matches and will be looking to add to the one Champions League goal he has scored this season.

Bayer Leverkusen, on the other hand, drew 2-2 draw to Wolfsburg last weekend after losing 0-3 to Porto in their last Champions League match and currently sit 15th in the Bundesliga.

Xabi Alonso’s side have been unfortunate with injuries; Karim Bellarabi, Sardar Azmoun, Exequiel Palacios and Florian Wirtz are all unavailable due to injury.

Atletico should win this match and will know if they have all to play for on the last match day after seeing Porto’s result earlier in the evening.

Despite sitting in 4th place, Eintracht Frankfurt still has a chance to secure a spot in the Champions League knockout stage with all four teams separated by just three points in their group. Marseille is second with 6 points from 4 matches, same as Sporting Lisbon but with a better goal difference.

Frankfurt should be confident against Marseille, they have strung together three successive Bundesliga wins since they lost to Tottenham.

A win over Marseille and Sporting Lisbon will see them progress to the knockout stage in their first-ever Champions League campaign, so their destiny is in their hands.

Marseille arrive in Germany on the back of a poor run of form which has seen them slip to fifth place in Ligue 1 following three successive losses. They could be without Eric Bailly due to a dead leg but should have a strong side on the field in Germany.

Frankfurt is favourite to win this fixture, they are in better form and have the backing of their home fans, with Marseille struggling at the moment, Frankfurt should take advantage.

Antonio Conte’s Tottenham side need just a draw to ensure qualification into the knockout phase as they play hosts to Sporting Lisbon.

With seven points from four matches, Tottenham will be aiming to ensure that Sporting or Eintracht Frankfurt can not leapfrog them. They will be cautious knowing that they could slip down to third if they lose and results elsewhere don’t go their way.

Tottenham will be looking to put the loss against Newcastle behind them and get revenge for their 2-0 loss to Sporting in September.

Sporting is without top goalscorer Goncalves, but could still put Conte’s counter-attacking strategy under pressure.

Pierre-Emile Hojbjerg missed the match against Newcastle but could be available, while Dejan Kulusevski is still missing due to injury.

Tottenham should be winners of a low-scoring affair, with Harry Kane’s efficiency in front of the goal ensuring they will take the chances they create, the task for Sporting will be limiting those opportunities.